Thien Duong (Paradise) grotto, a miracle in the heart of the World Heritage Site - Phong Nha-Ke Bang National Park. Thien Duong cave is considered the largest and longest caves in Phong Nha-Ke Bang, also labelled the world’s most beautiful and magnificent cave when it was discovered in the central province of Quang Binh in 2005, the cave was formed around 300-400 million years ago, surrounded by underground streams and rocky mountains. Let's explore the magnificent and massive grotto and caves of Thien Duong in this day tour from Hue.
06:30 a.m Picking up at hotel (located within Hue City center only) and departing for Phong Nha Ke Bang National Park. 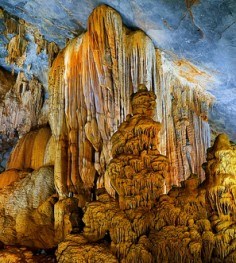 Around 08:00a.m, visiting La Vang Holy Land (Christians believe that Mary showed flexibility in this area in 1798 and a church was erected. It is an important place of pilgrimage for Catholics of Vietnam and La Vang Holy was recognized by the Vatican)
On the way, information about DMZ of Quang Tri is introduced as the bus passes by the 17th parallel line (a demilitarized zone established as a dividing line between North and South Vietnam during the Vietnam War)
11:30a.m arriving at Phong Nha and having lunch. After lunch, 01:00PM arriving at Thien Duong Cave. Taking electric golf cart to the cave and starting exploring Thien Duong cave.
This cave is 31 km long, longer than Phong Nha Cave which had been considered the longest cave in Phong Nha-Kẻ Bàng National Park. The height can reach to 100 m and 150 m wide. The limestone formation is also more spectacular than that of Phong Nha Cave. The British cave explorers were impressed by the beautiful and spectacular stalactites and stalagmites inside this cave and they named it Thiên Đường Cave (Paradise Cave). Back to the bus at 03:00PM and heading back to Hue
07:00PM Arriving in Hue and dropping off at hotel. Tour ends

Bringing water, hats, sunblock, towels and sunglasses
All fares & itineraries are correct at the time of printing and may be subject to change without prior notice